Draft Fantasy Football is all about picking a diamond from the rough, a hidden gem that no one else has considered, or a Premier League player hitting a good run of form.  This weekly article is here to help you find your golden ticket to a big score, recommending five attacking differentials who could score big in the upcoming gameweek.

Your third striker just got injured?  Your fifth midfielder stuck in rotation hell?  We’ll help you out with some suggestions to give your team a little boost!

Prospects: With Liverpool pushing hard in the Champions League, rotation is going to be a key theme as this season reaches the final three gameweeks.  Ings was the beneficiary of rotation in GW35, chipping in with a timely goal.  Adding this goal to the assist he registered in GW31 gives Ings the advantage over rival Solanke for the starting birth.  We expect Ings to retain his place in the starting 11 this weekend, and with struggling Stoke up next, look to Ings for more attacking returns!  The Englishman should be free in most Draft Fantasy Football Leagues.

Prospects:  Since joining Newcastle from Leicester in January, Slimani has been quite a flop; although this has a lot to do with rotten luck with injury.  That being said, Slimani started in GW35, and whilst it did not bring about any attacking returns, there were certainly glimpses of potential.  Newcastle have been in excellent goal scoring form of late too, and with Premier League basement boi’s West Brom in town, we expect plenty of goals.  Of course if Slimani is too much of a punt for you, then look to GW35 Punting for Gold chap Matt Ritchie.

Prospects:  It has been a largely disappointing season for both Austin and Southampton.  But we are backing ‘hot’ rated (see our Draft Fantasy Football ‘hot’ / ‘cold’ player ratings) Austin to make an impact in GW36 as the Southampton striker continues to build upon his return from the latest injury set back.  Having lead the line in the FA Cup semi final against Chelsea and having registered a goal in GW33 against Arsenal; Austin will be most certain to start against Bournemouth.  This south-coast derby fixture has all the potential for a great game, with the probability for goals high.  Bournemouth have not kept a clean sheet since GW25, look to Austin to exploit a poor Bournemouth defence.

Prospects:  We would recommend taking a punt on Bolasie if you are looking for a 4th or 5th midfield option.  Rated ‘hot’ in our Draft Fantasy Football hot/cold rankings, Bolasie offers an attacking threat with excellent end of season fixtures.  Since returning from injury, he has been able to string together a consistent run of starts, and Big Sam appears settled in his team selection.  Starting in the win in GW35 over Newcastle would suggest that a change to the starting 11 is highly unlikely and Bolasie will be guaranteed a starting role.  Opposition Hudderfield have been struggling somewhat of late, and should be an easy 3 points for the Toffees.

Prospects:  Since stepping in for the injured Stanislas, Ryan Fraser has returned 1 assist in the four full gameweeks.  Whilst this is not a run of form that would normally be worth shouting about, this weekend Bournemouth travel to struggling Southampton who have kept only two clean sheet in the past 13 gameweeks.  This fixture is highly likely to bring about goals, and whilst it is highly likely that the main Bournemouth attackers: King, Wilson, Defoe, and Ibe are already taken in your Draft Fantasy Football league – we highly advise that if any of these four are available you take a punt on them; Fraser provides a cheap option to get on the Bournemouth train for the GW36 goal fest.

Check out our GW36 Calculating The Cleanie blog here! 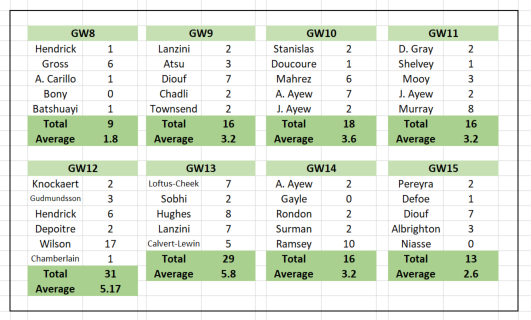 Here at The Fantasy Football Chaps, we’re proud to be pioneer’s for having a Draft Fantasy Football League that runs COMPLETELY OFFLINE!  Check out our article looking into how to make this a reality, and have full control over customising your Draft League!

If this sounds like too much effort, we would highly recommend using an online platform from either the guys at Draft Fantasy or Fantrax.   Draft Fantasy uses a scoring system similar to the standard Official FPL game, where as Fantrax mainly uses the more intelligent scoring system made famous by Togga.  Both offer potential for end of season playoffs, as well as many other options for customisation!