Our Team Profiles evaluate the recent form, current lineups, predicted changes, and one’s to watch for every Premier League side!  Keep an eye out for updates to these pages throughout the season, as these hints and tips may prove invaluable to your Draft Fantasy Football success.

Here we’re looking at things from a general Draft Fantasy Football perspective, so use this advice and apply it to which ever platform you’re using – Draft Fantasy, Fantrax, or FPL Draft.

📝 Current Lineup:  Leicester are really finding their groove under Rodgers, and Tielemans continues to perform wonders.  They have to make his move permanent in the summer!!!  With Albrighton returning from injury, he’s now being stationed on the right hand side, with Maddison and Tielemans also in support of Vardy.  Youngster Choudhury gained a rare start in GW36, as Gray and Barnes appeared from the bench.  In defence, Morgan was absent, so Maguire and Evans were the two centre-backs.

🔮 Predicted Changes:  With City up next, Rodgers may give Choudhury another start as more defensive cover will be required.  We therefore wouldn’t expect any changes for the GW37 visit to Manchester City.  Tielemans, Maddison, and Vardy will be enough attacking threat to cause City a few problems.  Gray and Barnes are likely to start on the bench once again.

👀 Ones To Watch:  Tielemans is a must have acquisition if you can get him, he performs well no matter who his opposition is.  With Barnes and Gray having to make do with bench slots, there aren’t many low ownership prospects from Leicester to tap into.

📝 Current Lineup:  Liverpool continue their excellent form, and their team is remaining fairly consistent.  An injury to Firmino enabled Sturridge to start, but he came away with zero attacking returns.  Henderson, Wijnaldum and Keita were the central midfield three, with forgotten men Shaqiri and Oxlade-Chamberlain coming on as late substitutes in GW36.  In defence, Lovren gained a rare start at the expense of Matip, and Gomez was given a couple of minutes as he regains his fitness after a long injury lay-off.

🔮 Predicted Changes:  Firmino is likely to come back in for the GW37 trip to Newcastle, as long as he’s back to full fitness.  Elsewhere, there will potentially be a change at centre back, with Matip, Lovren, and now Gomez vying for the position alongside Van Dijk.  There is a chance Gomez will be given a chance to impress from right-back.

👀 Ones To Watch:  Keita and Henderson have been putting in some decent displays recently, and they could be decent signings for the season finale; especially on Togga scoring.  Gomez or Lovren could be worth a punt if you fancy predicting the central defensive selection!  We would expect Oxlade-Chamberlain to only feature from the bench for the next couple of games.

📝 Current Lineup:  City continue to win every game, and they look like they will take the title.  As ever, lots of rotation from Pep.  Aguero, Sterling and Sane were the attacking three during GW36, with Bernardo, Silva, and Gundogan the central three behind.  De Bruyne will struggle to play again this season, and Fernandinho is also struggling with a minor injury.  Kompany partnered Laporte as he played his second game in a few days, with Walker and Zinchenko as the full-backs.

🔮 Predicted Changes:  Hard to tell, but City should continue with their ‘best’ XI for the GW37 fixture against Leicester.  Stones may come in for Kompany, but other than that we wouldn’t expect any changes.  Mendy continues to be on the periphery, and the likes of Jesus and Mahrez will likely have to make do with minutes from the bench. 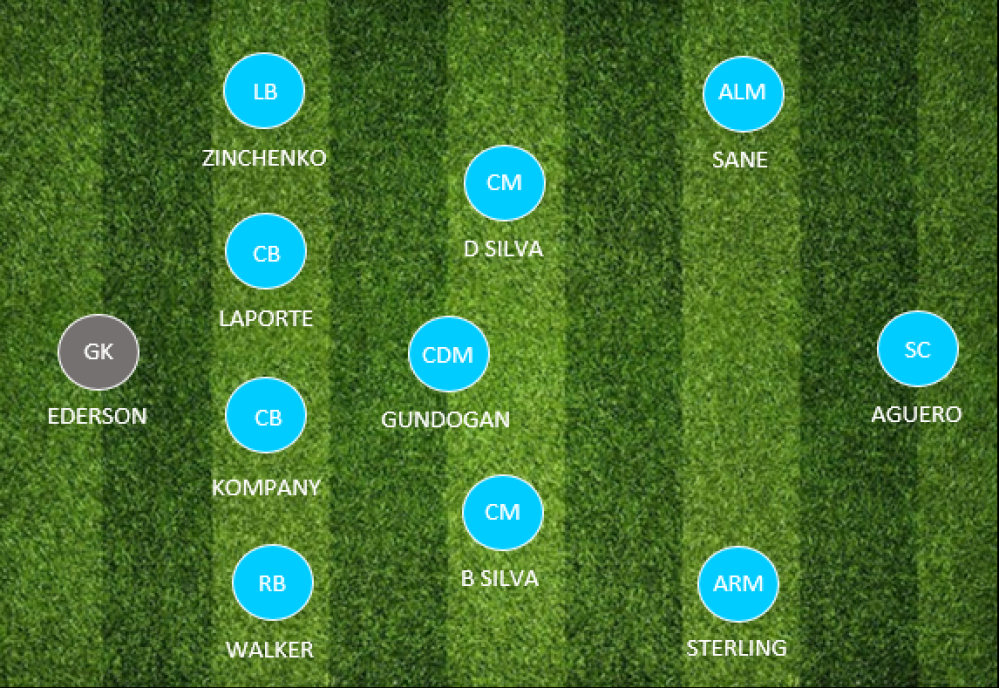 👀 Ones To Watch:  Zinchencko could be worth a punt in Togga scoring leagues.  Despite being a midfielder playing in defence, he still usually scores well on Togga scoring,

📝 Current Lineup:  It’s all going wrong for United at the moment.  Just one win in the last five Premier League games.  The Red Devils do have two very kind fixtures to end the season with though; Huddersfield and Cardiff.  Solskjaer has been rotating a fair amount due to the poor form, with Lukaku, Rashford and Mata fielded as the attacking three in GW36.  Rashford has been struggling with injuries recently, so it looks as though Sanchez may get the nod for GW37.  Martial is apparently out of favour.  Perfect time for Sanchez to add to his tally of one goal this season?!?!  Matic, Herrera, and Pogba were the central midfield three in GW36, with Bailly partnering Lindelof in central defence.  Bailly went off injured though, so Rojo may start in GW37 if Jones and Smalling are both ruled out.

🔮 Predicted Changes:  As alluded to above, Rashford and Bailly look set to miss GW37, with Rojo and Sanchez best placed to come into the side.  Martial is out of favour (apparently) and Jones and Smalling have both been suffering with injuries.  Other than that, we expect the team to remain the same.  De Gea should keep his place, despite some poor form.

👀 Ones To Watch:  Could Sanchez be the one to take a punt on for GW37?!  The Chiliean has scored just one goal so far this season, but he could start against Huddersfield.  Might be worth a punt if you’ve got a important Play-off game coming up!!  We would say to back a United defender considering the fixtures, but they have been very poor at the back recently.

📝 Current Lineup:  Newcastle have moved to a more traditional 4-4-2 formation in recent weeks, with Manquillo and Dummett stationed as the full-backs, allowing Ritchie, and now Atsu, to play more as wingers.  Schar and Fernandez were the central defenders for GW36, as Lascelles missed out through injury.  Hayden and Shelvey were the central midfielders, behind Perez and Rondon.  Perez with withdrawn in the first half against Brighton, with Kenedy taking his place.

🔮 Predicted Changes:  Lascelles will come into the side for Fernandez if he’s fully fit, and Perez will have to drop out if he is unable to recover in time for GW37.  Kenedy is likely to deputise, with Muto the only other real option.  Diame and Ki are likely to have to wait for a chance to impress, with Shelvey likely to retain his place alongside Hayden.

👀 Ones To Watch:  Hayden has been performing very well on Togga scoring, he he’s one to look at for Fantrax players.  Ritchie is a consistent points scorer, and Rondon and Perez are always decent shouts.  Schar is also a great Togga scorer on his day.

Check out our other Team Profiles here: