Our Team Profiles evaluate the recent form, current lineups, predicted changes, and one’s to watch for every Premier League side!  Keep an eye out for updates to these pages throughout the season, as these hints and tips may prove invaluable to your Draft Fantasy Football success.

Here we’re looking at things from a general Draft Fantasy Football perspective, so use this advice and apply it to which ever platform you’re using – Draft Fantasy, Fantrax, or FPL Draft.

📝 Current Lineup:  Southampton are scoring a fair amount of goals at the moment, and are currently lining up with a front three of Ings, Long, and Redmond.  All three of these Chaps look like decent options ahead of the season finale.  JWP and Hojbjerg are also contributing decent points from central midfield.  Yoshida and Vestergaard both missed out in GW36, with Bednarek and Stephens the two centre-backs.  Valery returned to the side at right-back.

🔮 Predicted Changes:  Yoshida or Vestergaard will come into the side for Stephens if they are fully fit, or both could come in and there be a shift to a back three.  Other than that, there shouldn’t be much of a need for changes.  Lemina should continue to occupy a bench slot. 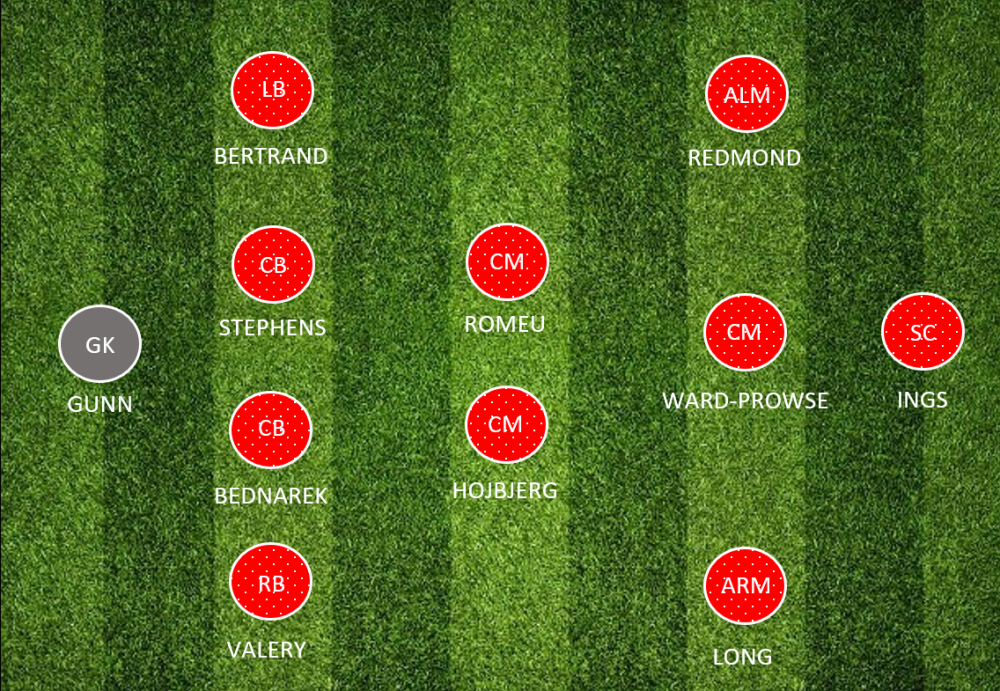 👀 Ones To Watch:  Redmond, Ings, Long, JWP, and Hojbjerg all look good for the final couple of games.  Southampton are playing decent football, and should score a few goals over GW37 and 38.  The defence has been fairly leaky in recent times though, so maybe stay away from their defenders.

📝 Current Lineup:  Tottenham’s GW36 defence featured Foyth, Alderweireld, Sanchez, and Davies, with Dier, Rose, and Eriksen ahead of them.  The attacking slots were filled by Moura, Alli, and Son.  Tottenham lost this game to West Ham, and followed this up with a defeat to Ajax in the Champions League on Tuesday night.

🔮 Predicted Changes:  Extremely hard to tell considering Tottenham have it all to do in next weeks Champions League Semi Final.  We would expect the defence to once again be Foyth, Alderweireld, Sanchez, and Davies, with Trippier and Rose rested.  Vertonghen will miss out after his sickening injury in the Champions League.  Dier is likely to come into central midfield, and Sissoko may earn a start now that he’s fully fit.  The attacking positions are very hard to predict.  Moura, Alli, or Llorente are likely to be rested, but Spurs don’t have many options for players to come into the side.

👀 Ones To Watch:  Foyth, Sanchez, or Davies could be worth bringing in as they look set to start, although Tottenham face Bournemouth away in GW37.  Sissoko could be a decent shout in Togga scoring leagues; he’s actually scored fairly well in recent weeks and months.  We’re not sure if Llorente will start this weekend.

📝 Current Lineup:  Watford are nearly back to their best XI, with Holebas and Pereyra now returning to the side.  Gray has continued up front in the absence of suspended captain Deeney.  Cathcart and Mariappa are currently the central defensive pair, but both have seen fluctuating form in recent weeks.  Feminia continues as the preferred right back.

🔮 Predicted Changes:  We would expect Deeney to come back into the side for Gray, despite his good form.  Deulofeu is too good to drop.  Elsewhere, the centre backs may change once again; Kabasele could come in for GW37. 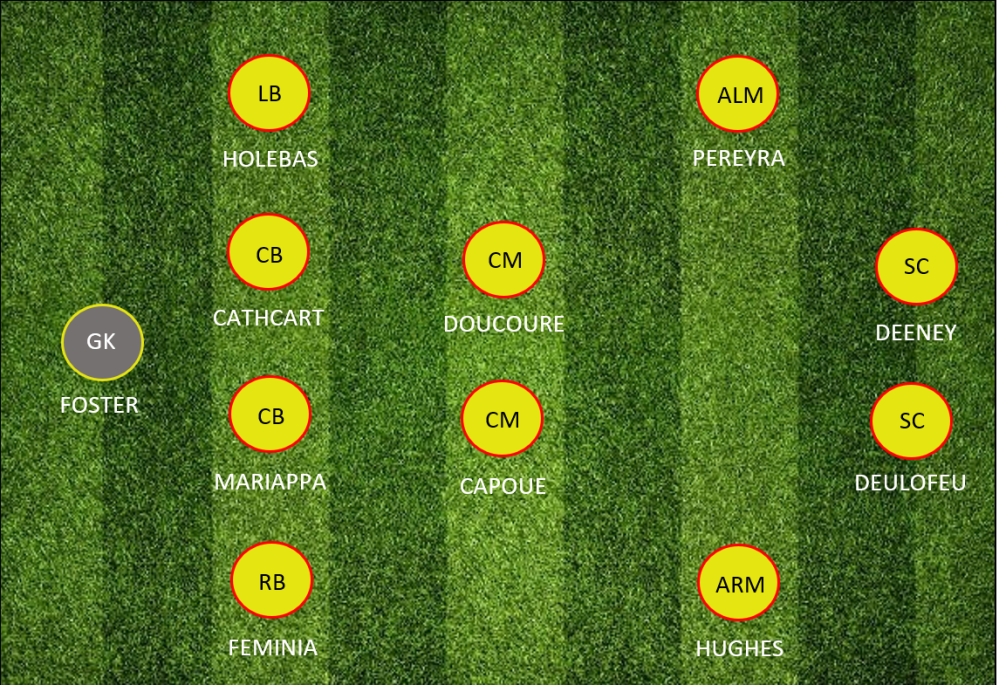 👀 Ones To Watch:  A few options here, but Watford do have a tough GW37 trip to Chelsea.  The likes of Pereyra, Hughes and Doucoure should be considered for the GW38 game against West Ham; those three are the most likely to be free agents in active Draft Leagues.

📝 Current Lineup:  West Ham got a huge win against Tottenham in GW36!  Arnautovic led the line, with Anderson, Antonio, and Snodgrass in support.  Masuaku continued at left-back after recent good performances, with Fredericks slotting in at right-back.  Diop and Balbuena continue at the central defensive partnership.

🔮 Predicted Changes:  None.  After such a good win last time around, West Ham should keep the same lineup, as long as everyone is fit!

👀 Ones To Watch:  Antonio has two goals in two games, and is once again on our radar…  He’s been so hot and cold so far this season though, he’ll probably get subbed off at half time in GW37!  Elsewhere, Snodgrass may be worth a punt in Togga scoring leagues, he usually scores well on that format!

📝 Current Lineup:  Wolves continue with their standard lineup from the second half of the season, with Jimenez and Jota stationed up front, and Neves, Moutinho, and Dendoncker sitting behind them.  Doherty and Jonny offer the attacking threat down the wings.

🔮 Predicted Changes:  Fulham at home up next; we wouldn’t expect any changes, as Wolves are looking to finish the season strongly. 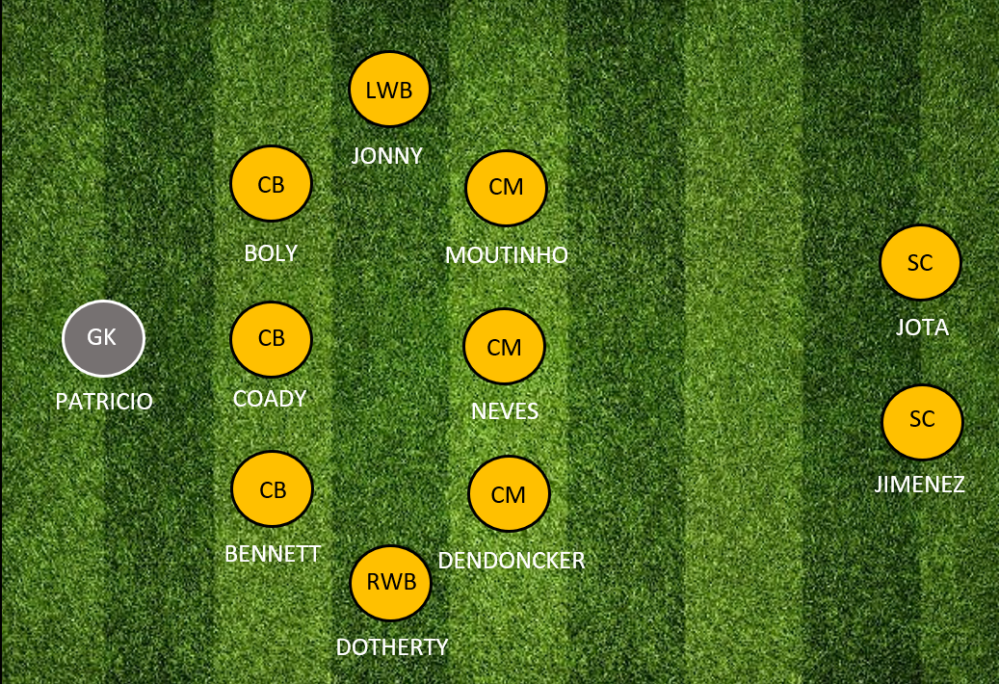 👀 Ones To Watch:  Jota and Jonny are the best of the potential free agents.  They are must have signings if they are free agents in your Draft League.  Any of the defenders look good for this weekend against Fulham.

Check out our other Team Profiles here: