Our weekly Chaps Choices article is here to give you hints and tips to help you find your golden ticket to a big score using our Alternative XI.  We recommend a starting eleven of Premier League Draft Fantasy Football differential picks, who could score big in the upcoming gameweek!

For this article we use the ownership statistics as per Draft Fantasy, with the rules being each player we highlight is required to have ownership of 35% or below, at the time of writing.  This way there’s a good chance some of these players will be free agents in your Draft Fantasy Football League.  Use these suggestions to give your team a little boost with a one week punt!

N.B: For the purposes of this article, we use the standard scoring system used by Draft Fantasy – with Bonus Points, but without Kante Bonus. 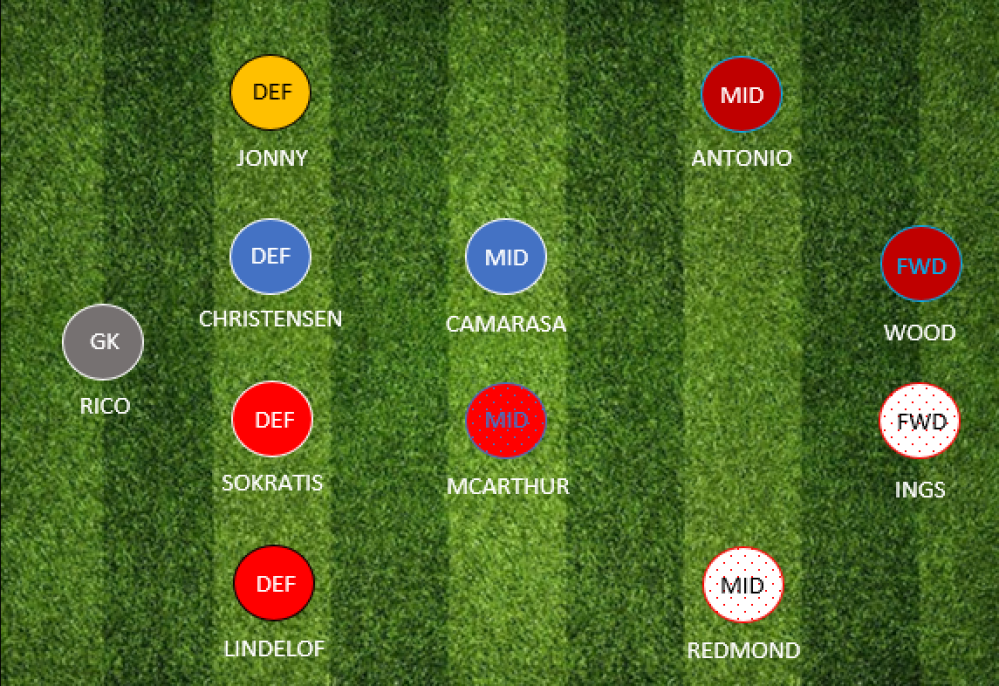 Prospects:  Burnley striker Wood is one of the most in-form players in the Premier League right now, and subsequently be on every Draft Fantasy managers transfer list.  In the last 5 GWs Wood has picked up 3 goals and 3 assists, taking his around Draft Fantasy score to 127 points for the year.  The GW37 fixture away to Everton should bring about more attacking returns despite Everton keeping two cleanies on the bounce.  We expect this game to be tightly fought, but with effectively nothing riding on this fixture, we expect both sides to play with freedom!

Prospects:  This chap has not been on the greatest form since returning from injury; Ings has only picked up one attacking return (an assist) in the last 4 GWs.  This being said, a player of Ings quality will not go long before finding the back of the net again.  With Southampton in good form and the team looking far more cohesive in attack we expect Ings to once again partner Long up front and have the creative Redmond behind.  GW37 opponents West Ham have struggled to keep clean sheets all season; that being said, West Ham upset the apple cart in GW36 with a 1-0 win over Spurs.  We expect goals goals goals in this one chaps.  All aboard the Danny Ings show.  Shane Long (10% Draft Fantasy) is a surprising alternative here, as he’s actually scored four goals in five games!!

Prospects: The Palace midfielder can often be a forgotten man of Draft Fantasy football with the attention typically focusing on the likes of Milivojevic and Townsend.  However McArthur has been ticking over the points of late drawing him level 4th highest Draft Fantasy points scorer for Palace so far this season (115 points).  In the last 3 GWs, McArthur has contributed a goal and an assist, making him a very attractive low ownership player for the GW37 fixture to Cardiff.  Cardiff are on their final, albeit unlikely, push for Premier League survival; nothing less than a win will do at this stage.  With only 1 clean sheet in the last 6 GWs we’d expect Palace to get a goal, forcing Cardiff to be more attacking as they chase a win.  Expect McArthur and co to get plenty of space, and plenty of opportunities for attacking returns.

Prospects:  As we have already pointed out, Cardiff are on their final, albeit unlikely, push for Premier League survival; nothing less than a win will do at this stage.  If Cardiff are to pull off the most unlikely of Premier League survivals; it will largely centre around Camarasa.  The midfield maestro has been directly involved in 9 of Cardiff’s 30 goals this season; contributing 5 goals and 4 assists.  Camarasa’s most recent form isn’t great, only 1 assist in 6 GWs so expect this form to change as he looks to lead from the front.  Opponents, Palace, are not the worst side defensively and have kept 2 cleanies in the last 5 GWs.  However we think that at home, there is one final chapter in what has been a dramatic season for Cardiff in so many wonderful and tragic ways.  Camarasa to score in a game filled with goals?  Thats the dream.

Prospects:  Redmond has been on fire in the last 4 GWs picking up 2 goals and an assist whilst turning out some truly spectacular performances for the Saints.  Redmonds total Draft Fantasy points haul of 126, the highest Southampton points scorer by some margin, goes to show just how crucial Redmond has been to Premiership survival.  The 5 goals and 5 assists for the season are perhaps still not enough to really feel that Redmond is fulfilling his potential but if the second half of the season is anything to go by; perhaps it is not far away that we finally see a genuinely consistent top flight footballer.  As for this weekend, opponents West Ham will provide a tough challenge for Redmond.  However, West Ham have nothing to play for, and have kept only 1 clean sheet in the last 7 GWs: so expect goals chaps, and expect Redmond to be in the thick of the action!

Prospects:  An Antonio goal in GW36 proved to be the winner in an unlikely 1-0 victory away to Spurs, inflicting the first defeat at the North London club’s new stadium; a record that West Ham will revel in; having delivered the same fate to Arsenal.  The GW36 goal was Antonio’s 2nd goal in as many GWs and his 6th in total for the season.  We expect Antonio to continue in the same vein of form in GW37 as the Premier Leagues 6th worst defence, Southampton, come to town!

Prospects:  Wolves 3rd highest scoring Draft Fantasy defender, Jonny, offers Draft Fantasy managers more than a clean sheet option this GW.  With Fulham as his opponents, we’d typically expect Jonny to walk away from this fixture with a clean sheet.   However, it is in attack that Jonny can prove to be a real differential for your Draft side; his 1 goal and 3 assists suggest that Jonny is more than capable in the final 3rd; and given that Fulham are playing without an constraints, we expect the game to be an open one.  If you are looking for a low budget defender with attacking potential; look no further than Jonny for GW37.

Prospects:  The first question that sprung to our minds was: “WTF chaps?”  We guess you’re thinking the same.  Form aside, (because if we went purely on form we wouldn’t entertain an Arsenal defender for GW37) Sokratis is an attractive option for GW37.  His relatively low ownership statistics are likely to be irrelevant as we expect Sokratis to be available in many active leagues.  GW37 opponents Brighton are in terrible goal scoring form having scored only 1 goal in 7 GWs.  Combine their recent goal scoring form with the fact they’ve only scored 33 goals in 36 GWs (the 3rd worst goal scorers in the Premier League); we cannot look away from a Sokratis and Arsenal clean sheet.

Prospects:  Another one whose form we’ve had to look beyond as neither Lindelof or Manchester United have kept a clean sheet in the past 9 GWs.  So what makes Lindelof an attractive proposition this GW is the fact he faces the Premier Leagues worst goal scorers Huddersfield (Huddersfield have scored only 20 goals this season).  There is also an outside chance that Manchester United could pip both Arsenal and Chelsea to the final top 4 slot; which will ensure that Lindelof has something to play for.  If there was ever a guaranteed clean sheet, this is it.

Prospects:  Christensen presents the best opportunity to get a top 4 side defender this GW.  With an injury to Rudiger and Cahill still seemingly seeing out the remainder of his Chelsea career on the bench, we expect Christensen to retain his place in the heart of the Chelsea defence for the GW37 fixture with Watford.  Watford are notable goal scorers, having bagged 51 goals this season; joint 7th with Leicester and only one goal behind Bournemouth who are the best outside the top 6 clubs.  Watford tend to be steady goal scorers; having only drawn 2 blanks in the last 10 GWs – so the Christensen clean sheet will be a hard fought one.  Watford might have one eye of their FA Cup final with Manchester City in 2 weeks time; this could prove critical if Christensen is to come away from the defensive returns!

Prospects:  Whilst we wouldn’t necessarily bank on Rico keeping a clean sheet against free scoring Wolves, we really can’t look past Rico’s form!  3 clean sheets on the bounce for the Premier Leagues worst defence (Fulham have shipped 76 goals 👀) is almost unbelievable.  In fact Fulham cost chap 2 his GW36 match up as the opponent fielded triple Fulham defence!!  Bold move.  We’re rewarding this level of bravery with a plug for Rico this GW as Fulham go in search of their 4th consecutive cleanie!  Madness.

The quoted ownership statistics were taken from Draft Fantasy.  Check them out if you’re after an online platform for your Draft Fantasy Football league!  Draft Fantasy uses a scoring system similar to the standard Official FPL game, and has many customisation options such as Kante Bonus, flex positions, custom scoring, and end of season play-offs!